Val Bregaglia is famous for its wealth of cultural and natural masterpieces.
We have created a collection of places that you absolutely must not miss.

The Via Bregaglia is a cross-border hiking trail that starts from Soglio (1090 m) ends to Chiavenna (300 m). Allow about 4 hours to immerse yourself in the nature and history that characterized it.
For more information:  Via Bregaglia - Nature, villages and a lot of culture 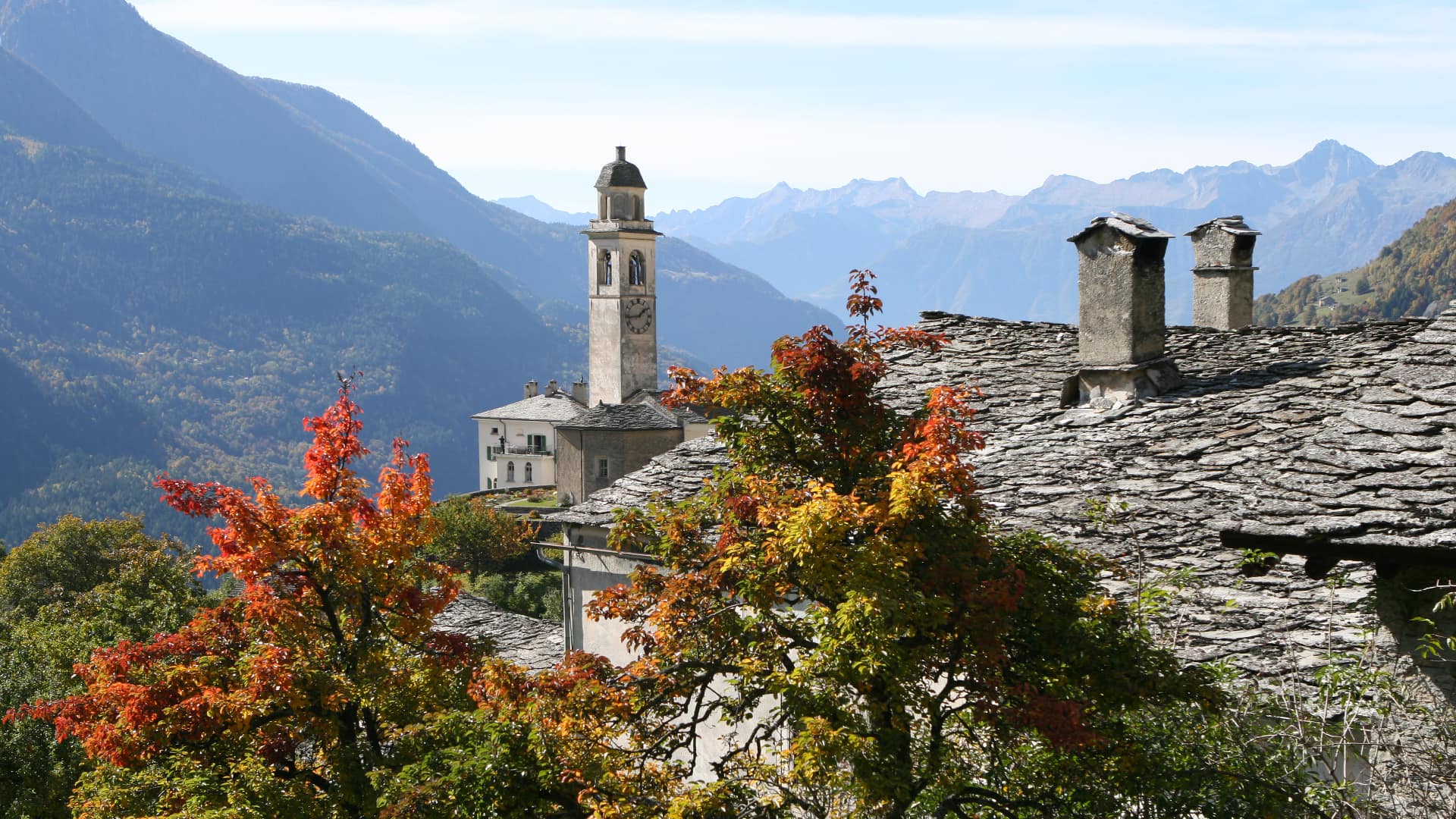 On foot, like the ancient Romans, you can walk the Septimer Pass. The six stages lead from the oldest city in Switzerland, Chur, through the mountainous regions of Lenzerheide, Surses, Bivio, up to Val Bregaglia and Chiavenna in Italy.
For more information:  Via Sett - Following the footsteps of the Romans 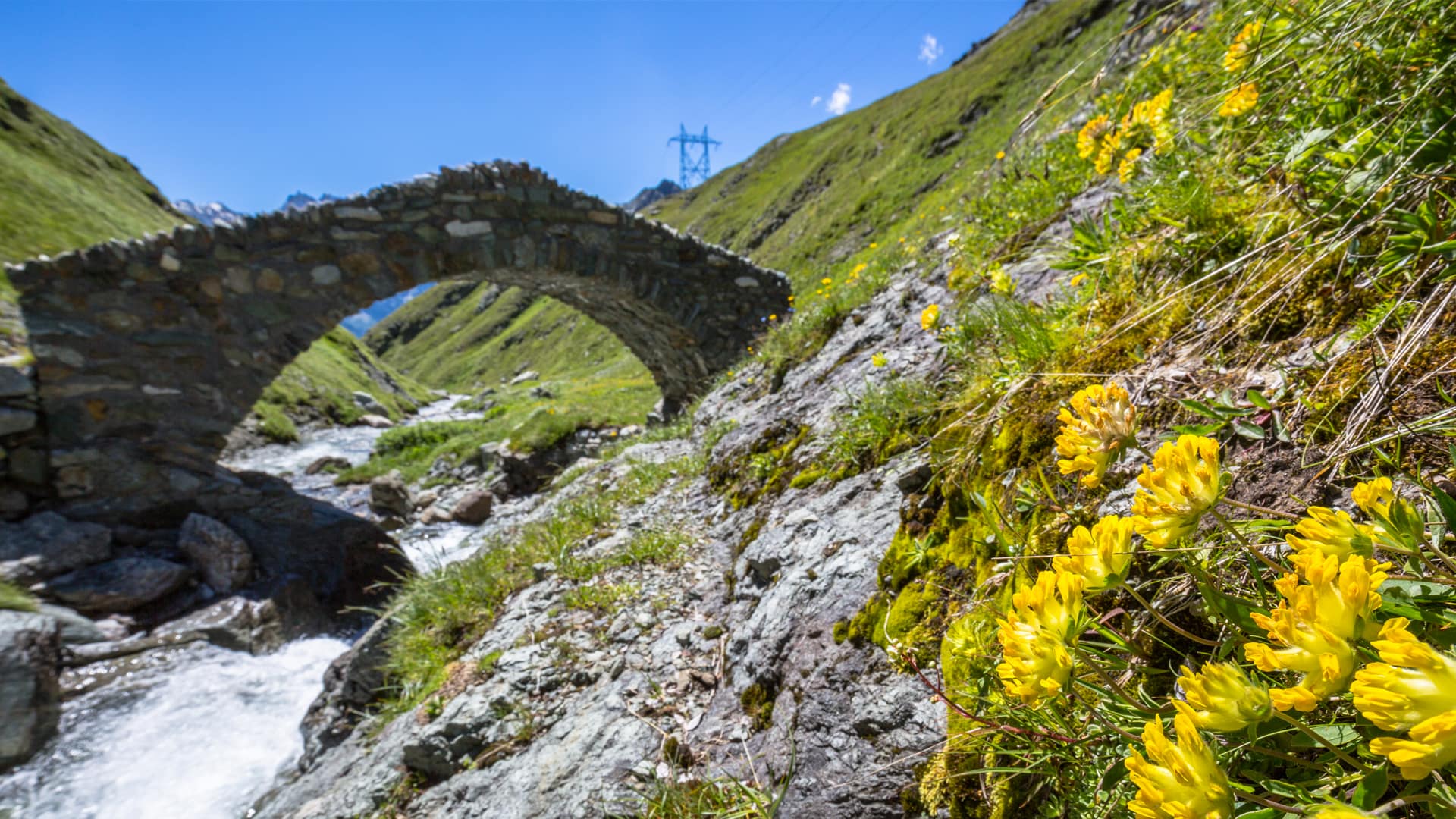 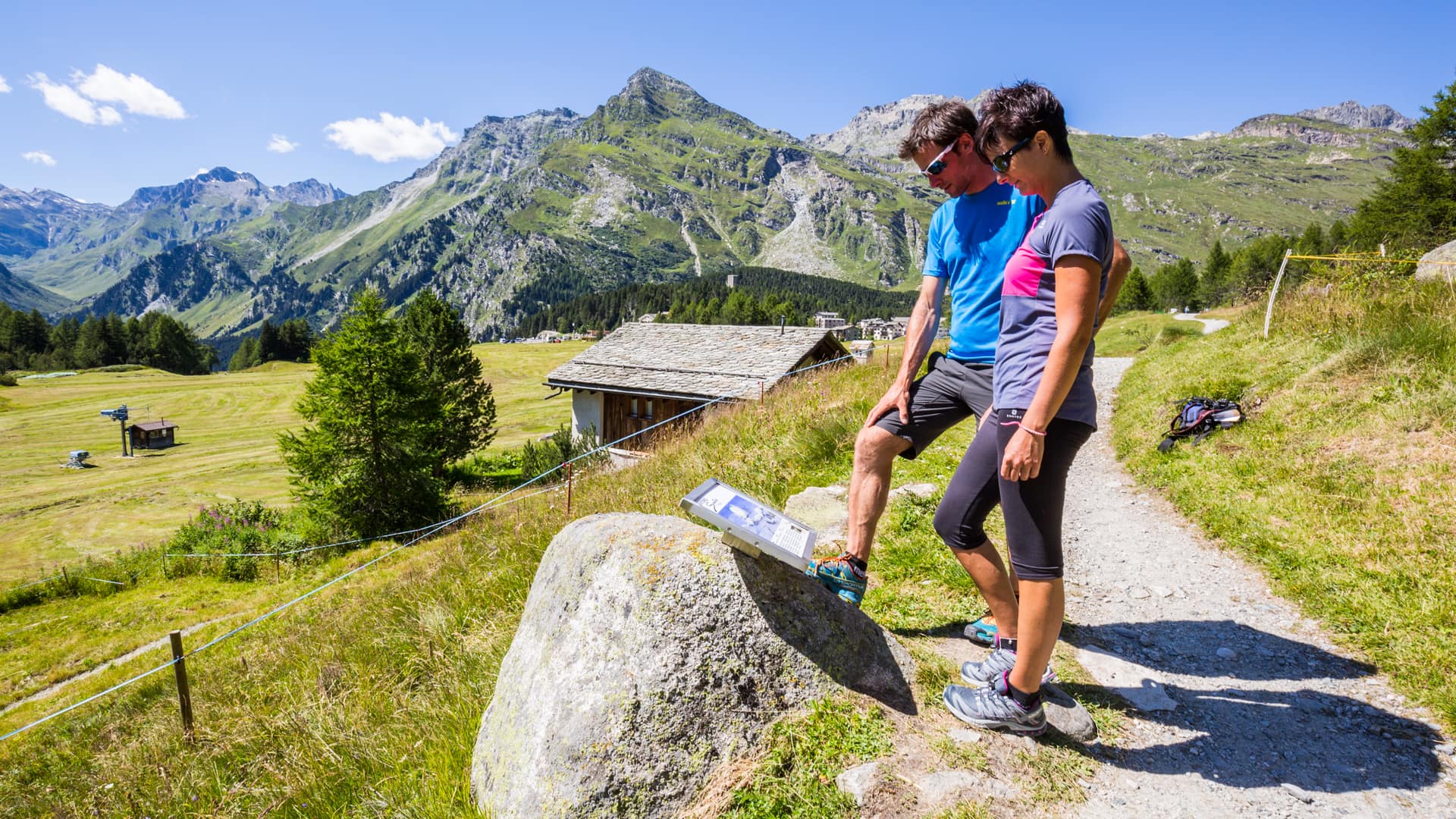 Around 2000 years ago the Romans brought the chestnut to Bergell, where it prospered thanks to a favorable climate. Today in the chestnut grove an educational path has been set up which, through information boards, informs the visitor about the flora and fauna of the area, the varieties of chestnuts and their cultivation.
For more information: An educational trail - the chestnut forest  |   Il castagneto
Not to be missed in October:  The Chestnut Festival

In the picturesque village of Coltura stands the Castelmur Palace in Moorish style with its two towers. The patrician house was built in 1723 by the Redolfi family and in the 19th century it was enlarged and newly furnished by Baron Giovanni Castelmur (1800-1871). Following the transformation into a museum in 1961, the palazzo rooms were made accessible to the public. There is a permanent exhibition on Graubünden confectioners.
For more information: Palazzo Castelmur 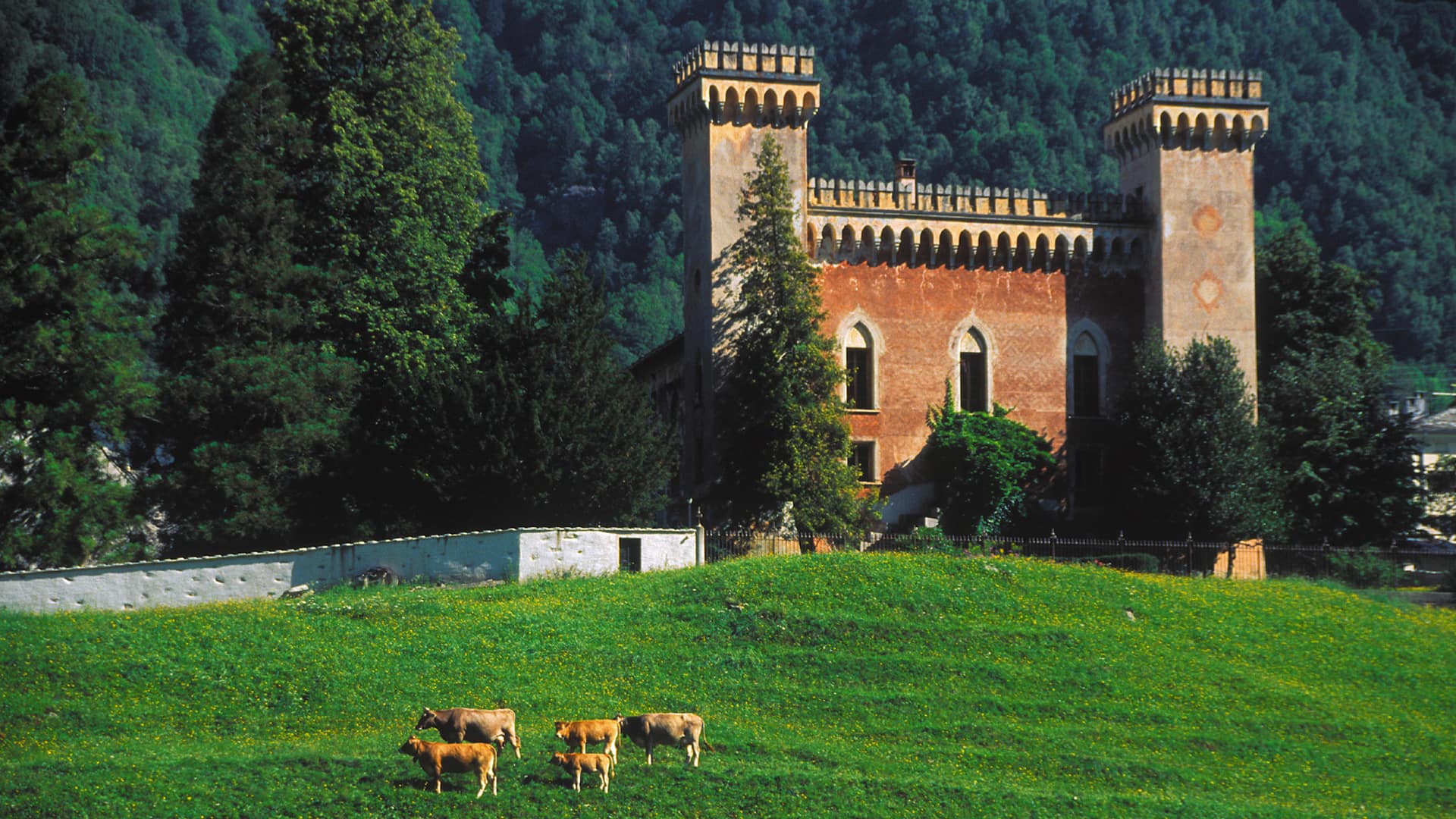 The Giacometti Art Walk® app, designed to be used on smartphones and tablets, will give you the opportunity to discover the life and work of artists. The App will guide visitors through paths that correspond to the paths of the valley. The visitor, following the paths, will automatically receive multimedia content on his smartphone or tablet, which will follow one another in a fluid and continuous narration..
For more information: Giacometti Art Walk

Atelier of Giovanni and Alberto Giacometti

The Giacometti atelier is in one of the stables located in the centre of Stampa. The stable on the ground floor was the home of cattle during the winter. The barn on the second level served as a storage for hay harvested from the Stampa meadows in the summer. It was this barn that underwent a modest internal restructuring to become the studio of Giovanni Giacometti,an artist who in the second half of the twentieth century would have gained world fame: his son Alberto.
The workshop can be visited during a visit to the Ciäsa Granda.
For more information: Atelier Giacometti

Chiavenna is an Italian town in the province of Sondrio, in Lombardy, an ancient village bordering on Switzerland. The name (in Latin Clavenna) is inspired by the prelatino theme "clav" (meaning "protruding cliff") probably referring to Sengio ("sénc"), a steep mountain overlooking the town. In the past it was an important strategic centre in the heart of Rezia, on the road between the Po Valley and the Rhine basin, while now it is a popular tourist destination, especially known for its crotti.
For more information: Valchiavenna Turismo

The waterfalls are in Borgonuovo di Piuro, in the Italian part of the Val Bregaglia, their double jump is very impressive. The Acqua Fraggia stream originates from the Lago Peak at 3050 m. In one Alpine watershed arise rivers which flowinto the North Sea, the Black Sea and the Mediterranean. The stream flows towards the valley, through two valleys of glacial origin and forms a series of waterfalls. An equipped route allows you to get to know the environment surrounding the falls up close. From the panoramic terraces along the path you can enjoy a magnificent view over the entire valley as far as the plain of Chiavenna.
For more information:  Cascate dell'Acqua Fraggia 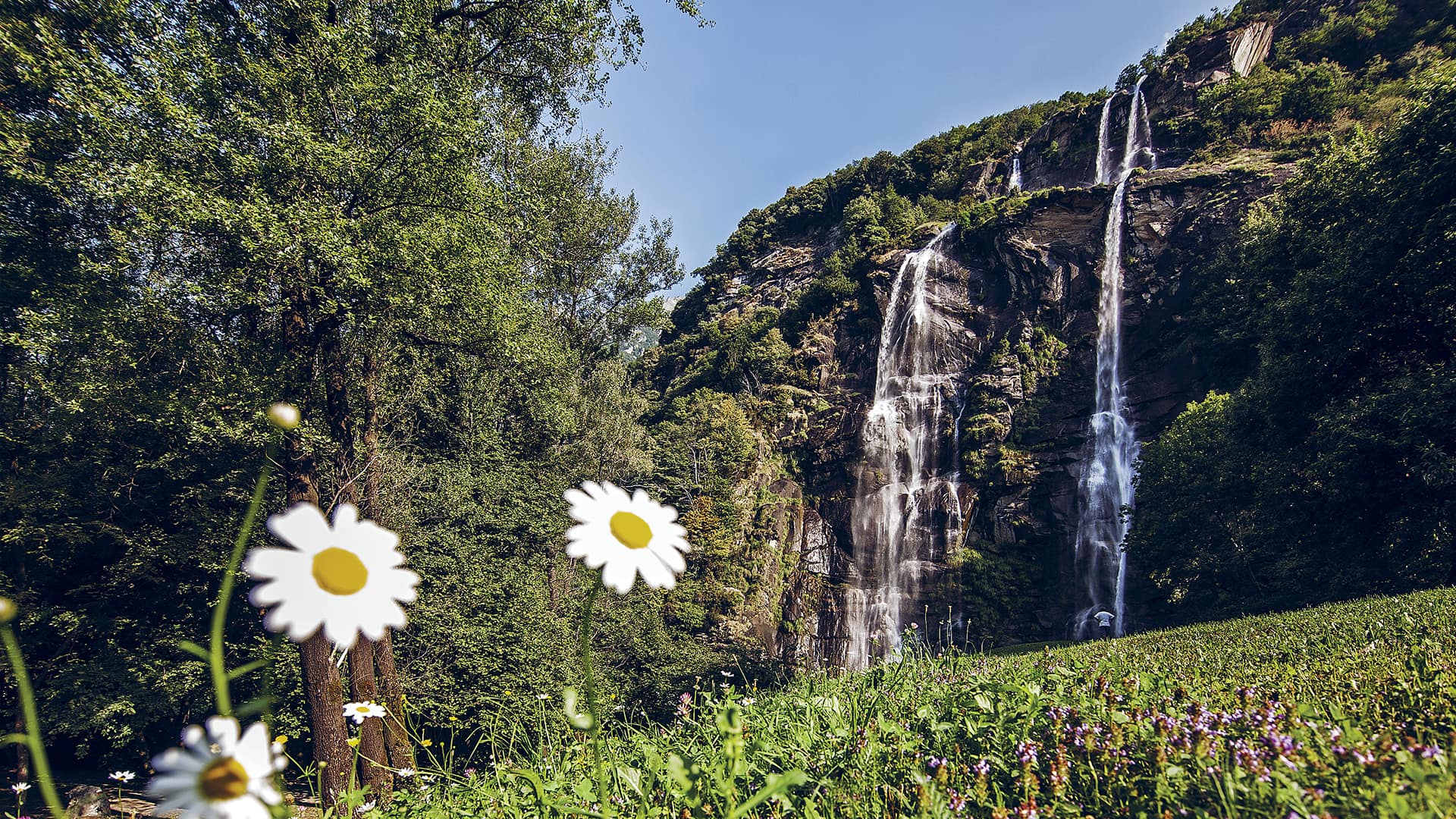 The palace was erected in the second half of the sixteenth century by the brothers Luigi and Guglielmo Vertemate Franchi, representatives of one of the richest merchant families of Piuro. After the landslide of September 4, 1618, the village of Piuro was wiped out. The Vertemate palace is the only building that was saved from the landslide. The building, with its elegant and simple lines, does not reveal the richness of the decorations and furnishings of the interior spaces. The vaulted walls and ceilings of the numerous interior rooms are richly frescoed depicting scenes from Greek mythology. Others are covered with cleverly inlaid wood. The palace is a beautiful Renaissance masterpiece immersed in an enchanting environment.
For more information: Palazzo Vertemate